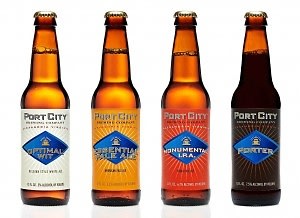 Like more than 1 million people in the DC area, Alexandria's Port City Brewing Company lost power in last weeks freakish weather phenomenon known as the "derecho." While those affected probably felt like tossing back a cold one, the Port City Brewing Co. crew frantically worked to preserve the 13,000+ brewing gallons in danger.

A 60-barrel batch of lager was the sole casuality…well, kinda. Due to the spike in temperature, the beer fermented differently than expected, thus introducing Port City's limited edition beer called "Derecho Common." Similar in taste to a beer called California common, the new brew will be available in early August on draft only.

Now this what you call making lemonade (...or beer) out of lemons.