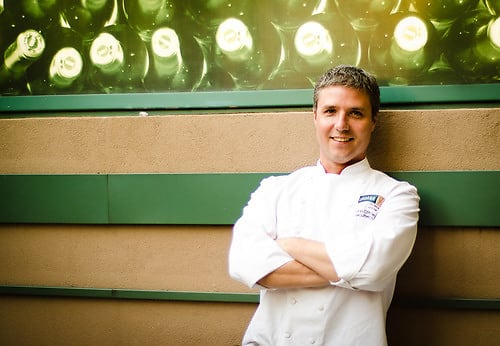 Out with the old and in with the new. Bourbon Steak is losing Executive Chef Adam Sobel and replacing him with Urbana's Chef John Critchley.

Micheal Mina, award-winning chef and and owner of Bourbon Steak, announced that he is transporting Sobel to the West Coast to be his partner and chef at his San Francisco wine bar and resto, RN74.

It will be interesting to see the influence that Critchley will have on the upscale steakhouse, located in the Georgetown Four Seasons. Critchley has an extensive restaurant resume and is credited for the growing popularity of Urbana. He is set to take over the kitchen on March 18th. Sobel bid his adieu last Sunday at a going away party and tweeted of his hangover at the airport the next day. It is safe to say he went out in style.

[Photo of John Critchley via]