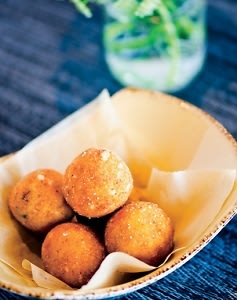 For some reason, many food critics overlook DC's innovative food scene for obvious ones in New York, LA and Vegas. Nevermind a restaurant in suburb of the District to get recognized. For people that don't believe that good food can be found out of the city, how's that crow taste? Family Meal's chicken pot pie fitters in Frederick, MD were just included in Alan Richman's list of Top Dishes of 2013 in GQ. [image via]
2 of 5