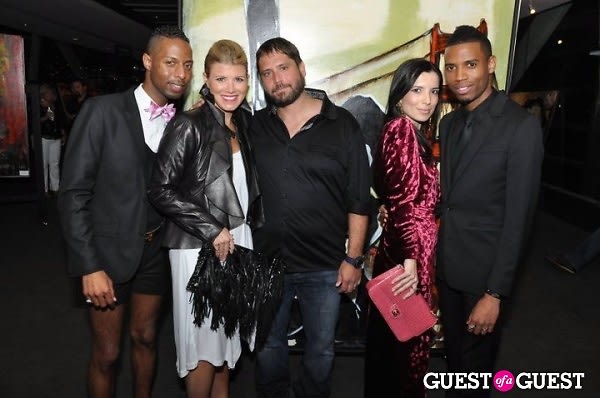 Go HERE for more photos by Michael Kirby and to tag yourself and your friends!

Thursday night, a fashionable set invaded the Newseum for the premiere of D.C native Drew Nussbaum's art work.  Complementing his works were the backdrop of Congress--illuminated as the sun set--and beats by famed D.C. DJ Adrian Loving.  Not off to a bad start, huh Drew?

Because the Newseum building also happens to be home to D.C.'s only Wolfgang Puck restaurant, The Source, guests of the private event enjoyed hors d'oeuvres and cocktails by Wolfgang Puck catering.

After a stint of "ghost painting," during which he was paid to paint under the name of another artist, Nussbaum decided he wanted to get credit for things he produced.

Also, since his mother's death last year, Drew has been hell bent on making a dent in the art scene.

"After my mother’s death last year, I really began to use my art as a catharsis,” says Nussbaum.  “This showing is definitely a celebration of her life, as well as a jumpstart to my new beginning."

All art displayed was available for sale on the evening of the event, and portions of the sales benefited the Columbia Lighthouse for the Blind.

While Nussbaum has opening in NY and LA on his calendar, he chose DC as his first stop.  Naturally.