Go HERE for more photos by Glenn Nelson and to tag yourself and your friends!

It was just yesterday we were in the fourth grade and standing in line anxiously awaiting the word we'd have to spell in front of the entire class. At first we thought, 'Ah, those were the good ol' days,' and then we discovered Rock & Roll Hotel's Spelling Buzz. The Spelling Bee for grown-ups.

If only we had known when we were younger that alcohol lowers our inhibitions, we just might have followed our fourth grade gut feeling and spelled c-a-n-t-a-l-o-u-p-e correctly. If you're like us and can't live that moment down, there's finally a chance to redeem yourself, lowered inhibitions included. 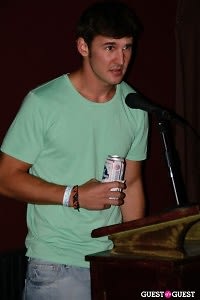 Every Friday night, the Rock & Roll Hotel hosts their Buzzed Spelling Bee where $6 gets you a PBR and a shot of whiskey. In between each spelling round, the remainder of the twenty participants are required to hit the bar for a drink to liquor up for their next round of words. Just like Scripps National Spelling Bee, the farther you go in the competition, the harder the words are to spell...but at Rock & Roll Hotel this also means the more alcohol you have to consume. As their motto states, "Drink to Spell, Spell To Win." First place winner receives a $60 bar tab and the runner-up goes home happy with a $30 bar tab.

Up for the challenge? Head on over to the Rock & Roll Hotel every Friday night where sign up starts at 6pm and the competition begins at 8pm, leaving you plenty of time to get buzzed before the bee.