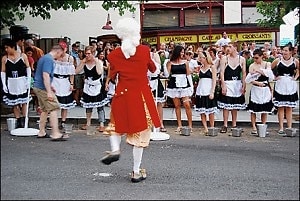 Students of history will note that although the storming of the Bastille on July 14, 1789 was the flash-point for the French Revolution, the democratic fervor it inspired inextricably led to the "Reign of Terror" and France's gore-porn love affair with  the guillotine. More than 200 years later, Adams Morgan's L'Enfant Cafe & Bar is symbolically reenacting that same downward slide for this year's Bastille Day celebration -- one they've again decided to commemorate with a French maid race.

Down 18th St. NW. During rush hour. On a Wednesday.

Setting aside the fact that the predominance of the "French maid" as a concept probably owes more to Frederick's of Hollywood than any historical reality, we think it's safe to say that this is pretty much the equivalent of some Parisian hot dog joint hosting a Playboy Bunny potato sack race on the Fourth of July.

Judging by of the 2008 race, that sounds about 12 times as exhilarating as what L'Enfant has in store for us all.

Either way, we're far from Francophiles and the cafe's marketing ploy sure beats the hell out of anything involving mimes, so we can't complain.  Just  have fun navigating the 18th and U interchange 'round dusk when a horde of Nicolettes and Dominiques clog up traffic and cause a fender-bender.  Or four. And, remember, this is DC after all, so more than one of those Henriettas is likely to be a pre-op Henry.

L'Enfant kicks off their Bastille Day festivities at 4 PM on Wednesday, July 14 and the maids get running at 8 PM sharp.  Get tous les détails here. 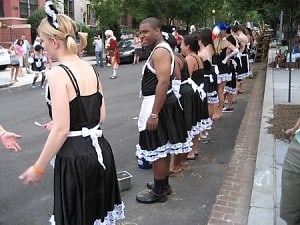 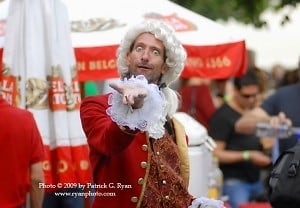 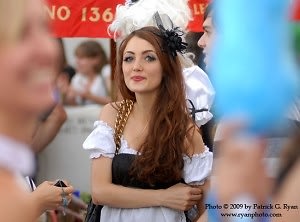 [photos via Washington Post, via DCist, by Patrick G. Ryan via SnarkInfested]