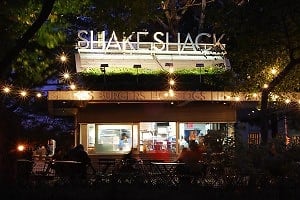 What are Guest of a Guest's favorite things? In no particular order, we would have to say: A good party. A good scandal. A good meal. We’ve had plenty of the first two as of late, but have been in critical and dire need of the third.

Thus, when we heard from Prince of Petworth that Shake Shack is opening up in the space that Fuddruckers had abandoned at 1216 18th Street NW, we may or may not have released a high pitched "EEEE" at our computers and rushed to to the Shake Shack website to investigate and drool.

For those of us not familiar with Shake Shack:

Second, know that Shake Shack, since opening its doors (windows?) in NYC's Madison Square park, has lived up to the hype of "best burger in New York City" several times over. 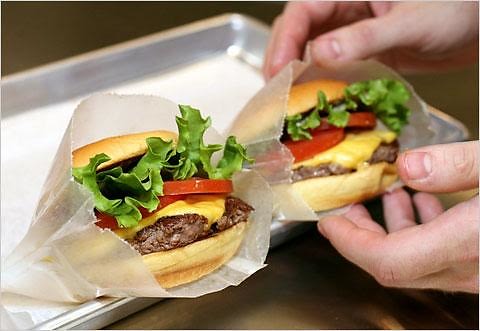 In addition to burgers, the Shake Shack serves (heavenly) shakes, root beer floats, fries, onion rings, hot dogs, frozen yogurt, beer and wine. The New York location has been going strong for six years, with a line of at least an hour every day between noon and two and a half hour all other days and times.

"Is it worth it to wait an hour in line for a burger and fries?", you may ask? Yes. Yes it is. When we were wee interns in New York City we had the spectacular task of waiting in this very line for our bosses every week, and were in turn rewarded with use of the corporate AmEx for our own lunch. We’ve tried every option on the menu. If Shake Shack truly opens by Dupont, we will be thrilled and gladly bear the crowds.

We may refuse to wait in line for cupcakes, but we'll do it for perfect burgers, fries, and milkshakes any day, and we really really hope Prince of Petworth's speculation is true. 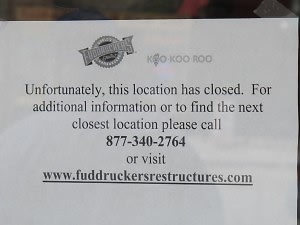