For those of us who don’t see an immediate correlation, bear with me:

Nine months after a week of winter storms struck DC into a house-arrest lull, an unusually high number of women are checking into DC hospitals to give birth to what have been dubbed "The Snowmaggedon Babies" Mothers-to-be interviewed for the article admit that their baby-making activities did reach a peak during the early February snowstorms.

"We lived in the apartment and had nothing to do," says an expectant mom in the article. 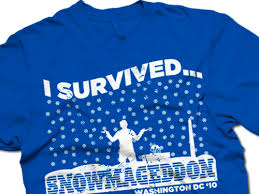 And can we really blame them? Snowmaggedon took a full week out of DC, MD, and VA (no, we will not call it "The DMV") residents' schedules, and after catching up on TiVo, social media, half finished books, apartment cleaning long forgotten, and that phone call to mother they finally had no excuse not to make, our fellow citizens realized that you and me, baby, ain't nothing but mammals...so why not?

-We know how D.C.ers survived Snowmageddon... -

This leads us to several realizations:

Will (one second, math time)...March 2010 cause similar baby boom? After all, mid-July brought power outages for up to three full days, and then, residents didn't even have television and internet to entertain themselves with.

Why is this city so ill equipped to deal with severe weather of any sorts? Get with it, Washington.

We better re-stock our TiVo queue and our fridge. We live with two wonderful roommates who are constant entertainment but, unfortunately, of the same sex.