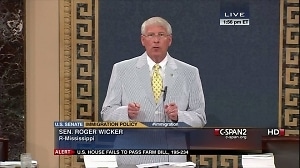 It is one of Capitol Hill's most fashionable traditions and it may become a thing of the past -- but not if Sen. Roger Wicker of Mississippi has anything to do with it!

For the past several years, senators have put on their puckered threads on every third or fourth Thursday of June. In light of the recent economic crisis and other hard times, the day was canceled because nothing is more disrespectful to our nation than an appropriate summertime fabric.

But Senator Wicker stuck it to the man and put on this cool striped regalia and took charge! It was basically like he was Norma Rae and asked, nay, demanded that Senators nut up or shut up.

What this nation needs is a government organization to step out in their summer best with pride. Don those boat shoes! Whip out that madras! For the stability of this nation, put on that Lilly dress! We can only serve our people if we look good!