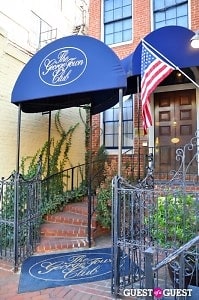 Social clubs and country clubs around the country are eyeing "Echo Boomers," or Generation Y-ers, to join their ranks as junior members. Count the George Town Club at 1530 Wisconsin Avenue among them.

The club tapped socialites Diana Minshall, 29; Ashley Taylor Bronczek, 29; and Kendall Arney Vincent, 28, to head their "young professional membership" campaign, which launched last night with a happy hour and a tour of the club. The drive targets socials under 35.

Prospective members trickled in last night to the informal Grill Room--the only room where jackets are not required--and picked at cheese, fruits and nuts elegantly laid out on a large silver platter. Cocktails were served with George Town Club napkins. General Manager Brian Armstrong gave two tours to accomodate the group, which grew to about 30 people after two hours. A second prospective member happy hour is taking place next week. Only people picked by the three young ladies could attend one of the prospective member happy hours.

The club is comprised of three Georgetown townhouses combined into one, with 15,000 square feet of entertaining space. The last townhouse was added in the '80's. Due to the multiple houses, there are many small, intimate rooms, each one taking on its own decor/personality from the federal living room, to the Georgian dining rooms upstairs, to the trellised garden room, to the dark English Gothic wine cellar dining room in the basement. In the wine cellar, members' wines are stored behind intimidating iron gates that are padlocked shut. 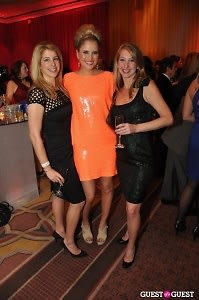 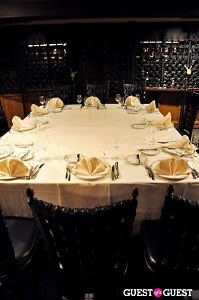 While the club itself does not boast any concrete history, large parts of the interior decor are priceless saves from 16th century French estates, JP Morgan's office, slate quarried from Thomas Jefferson's estate near Monticello, etc. The club may have been Suter's Tavern in the 1800's, and if that is the case, then it was the site of many major business deals that got our country up-and-running.

The membership drive comes hot on the heels of the leadership shakeup at the City Tavern Club, a comparable social/dining club on M Street in Georgetown. While the George Town Club insists that the timing is only a coincidence, it is possible many would-be-CTC-ers will be on board for the George Town Club.

George Town Club members have access to the pool and golf facilities at Argyle Country Club, as well as reciprocity with many social clubs nationwide.

The George Town Club will be closed in August for annual renovations and will re-open with a new Young Professional Committee in September.