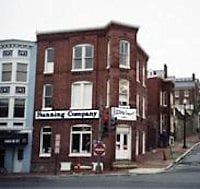 The Running Company, on the corner of M and 34th Streets in Georgetown, is undergoing renovations to become a rent-able 4-bedroom home.

A source says for the last 6 or 7 years until now, the upstairs had been a base for American intelligence officials while they spied on the comings and goings of the Ukrainian Embassy across the street. 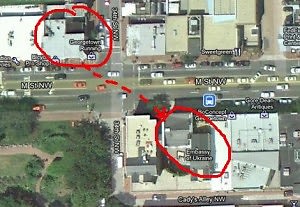 Apparently, officials barged into the store one day and demanded the space be handed over. The Running Company was allowed to use at least one room to store extra boxes and merchandise while the space was occupied.

Now, a washer-dryer is being installed as well as other upgrades to turn the space into an apartment. It was supposed to be ready September 1, but the new landlords need another month to whip it into shape.

Before you get your rental application together for this incredible property, it's probably already filled. The Running Company is a store owned and staffed by runners, and now hopes to have runners living there, too. With easy access to the canal running trails, and of course the supplies in the store, it sounds like a runner's paradise. We heard the space is going for a steal at about $1,000/room.

Images via Yelp.com and Google Maps