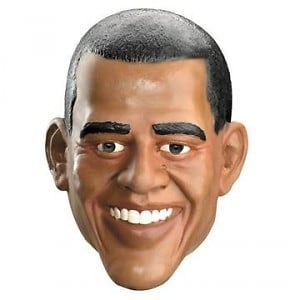 The people have spoken...well, kinda. Spirit Halloween has predicted Presidential Elections since 1996 through their sales and the accuracy may surprise you! The San Francisco Chronicle investigated this hard-hitting piece of journalism. The upshot of the article is this: the highest selling candidate's mask wins the election. It's a simple concept.

Via The San Francisco Chronicle:

Barr chuckled as she admitted that no, the Presidential Index isn't scientific. Still, there's no arguing with the company's stellar record. In 1996, 71 percent of the presidential-candidate masks sold were of Bill Clinton, compared with Bob Dole's 29 percent. George W. Bush sold 57 percent against Al Gore in 2000 and then 65 percent against John Kerry in 2004. Obama sold 60 percent against John McCain in 2008.

So far, Obama's mask is kicking Romney's latex butt. We've still got about a month until Halloween, Romney supporters, so don't fret! Forget about your old tired costume idea and show some support for your candidate this year!