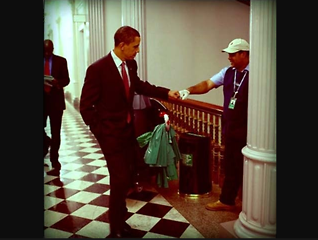 Thanks to Kanye West for this shot of just how (a) cool Barack Obama is; (b) how humble Barack Obama is; and (c) (while this doesn't fall in line with the other grammatical constructions, deal) who wouldn't want to pound it with Barack Obama?

The next unnecessary reality TV series will be featured on VH1 (home of our classiest TV trash reality series such as Rock of Love, Bad Girls Club, For the Love of Ray J, etc etc.) called Obama's Secret Handshake.  Contestants will be gathered and initiated through multiple bro-tasks to show their bro skills.  They will be drilled on all the hand shakes such as:

The Handshake (firm, of course, and with eye contact)

The Pound (seen above)

The fist pump (courtesy of our fave Jersey boys)

The High Five (keeping it simple)

And many more that are too secretive to be revealed now

Sorry guys, this won't actually be a contest, but at least Obama is keepin' it real in the White House.