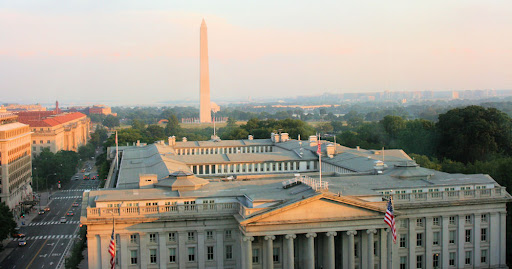 The U.S. Debt Ceiling is set at $14.294 trillion, which is the amount of debt the United States is allowed to carry to pay off bills. This is basically our country's credit card limit--except instead of credit cards, we issue bonds to citizens and institutions. We also borrow money from other countries, like China. China owns about one trillion dollars of our debt. How nice of them to spot us.

We officially hit this ceiling in May. As written by the Wall Street Journal, the Treasury has been using "stopgap measures" to keep paying bills, but will be totally out of money on August 2, although some analysts say we might be able to last until August 10. Ouch.

Between August 3 and August 31, we will be taking in $172.4 billion in income. However, we have $306.7 billion in bills to pay. $23 billion of that is for Social Security payments, and $29 billion is in INTEREST. Interest, on the debt we already have. Isn't that wild that we are spending that much every month in interest? We also owe $10.4 billion to students through Pell Grants, we have an army of soldiers to pay, and an army of busy hill staffers answering all of our angry calls that really deserve their checks this month...just to name a few of our financial obligations for August.

Our country has had debt ever since the beginning with our Revolutionary War against Great Britain (we began about $75 million in debt). From 1796 to 1811, we had 14 budget surpluses and only 2 deficits. Then, we were in debt again after the War of 1812, but we had 18 out of 20 years of surpluses and we paid off 99.97% of our debt. That was by far our most responsible period as a nation, but unfortunately for us, the people that were in charge of the budget back then are long gone. Since then, we have had cycles of debt and surpluses, and maintained a perfect credit rating of AAA, paying off bills and re-investing in our nation like a little goody two-shoes.

In recent history, we've had mostly deficit years, spending more than we take in. The exception to this was President Clinton's last year in office, when he balanced the budget. This does not mean he paid off our debt; he just didn't add to it. The way he did this was by cutting about $42 billion from entitlement programs, and taxing 39.6% of the income of the top 1.2% in the Omnibus Budget Reconciliation Act of 1993. It took seven years for it to catch up enough for him to leave office with a balanced budget in 2000. It's also worth noting that even though the super wealthy were taxed so heavily, the Dow Jones Industrial average rose 26.7 percent each year of Clinton's term (from 3,651 to 10,788), so the United States was still a peachy place in which to live and invest for the uber rich of the 90's. Clinton was also lucky enough to be a president in a time of peace, although who knows if it was luck or if he was just good at keeping his cool.

Even though Clinton didn't get to apply any of his hard work toward paying off the debt, he had the budget set up in such a way that future years would run trillion-dollar surpluses (assuming the economy stayed strong). Bush took office, and he decided that the surpluses belonged to the citizens of today, not the debts of the past. He issued dramatic tax cuts, assuming it would fire up the economy even more since people had more money to spend. Right after this happened, the twin towers and the Pentagon were attacked by terrorists in 2001, and Bush initiated a "war against terror" that we are still fighting, 10 years later.

Wars are expensive. So is the interest on our debt, Medicare/Medicaid, and Social Security. Baby Boomers are at the age where more and more are retiring every day and collecting checks from the government, rather than working and paying into the Social Security fund. Many of those baby boomers have seen their net worths collapse in the last three years with the mortgage crisis and subsequent stock market tumble of 2008-2009, so they need that dough.

After the mortgage crisis and stock market tumble, Obama started a healthcare plan (with considerable costs), as well as a stimulus plan to get more money flowing around the economy and create jobs...but it didn't work as well as he had hoped. We're still in a recession and we still have those medical bills to pay!

So, what's going on this week?

Republicans and Democrats agree that our spending is totally. out. of. control. This is not the girlfriend buying too many YSL outfits and Louis Vuitton purses, because at least she can consign those and get her act together; this is the mom with bad credit card debt and over 300 million mouths to feed.

At Guest of a Guest, we're doing our best not to take sides here, so we'll let you draw your own conclusion:

Obama wants to do what Clinton did and tax the uber wealthy again. His proposal would affect families with incomes over $250,000/year. The voice of the Republicans, John Boehner (by the way, if you're still reading, you need to know this: it's pronounced bay-ner) thinks the United States needs to cut programs and raise the debt ceiling. Obama's rebuttal: He doesn't want to cut programs that benefit the poor, and he knows raising the ceiling will only temporarily fix the problem. Boehner's rebuttal: Remember that costly healthcare bill you made us enact last year?

Right now, apparently our Treasury is analyzing which bills are more important than others for us to pay if our debt ceiling is not raised.

It's every man for himself at this point. We have been perusing apartments in Toronto and Vancouver. If you really plan on staying here, consider opening a Roth IRA account, or if you are lucky enough to have an employer that matches your 401K, DO IT.