Forever 21 has finally touched down in the District with its multilevel downtown store which opened this past weekend.  Located in the Woodies Building on 1025 F Street NW, affordable, trendy clothing is now accessible for any Twilight-loving tweens (or underpaid young adults) living in D.C.

Be they pregnant or not.  Forever 21's new maternity line, perfect for all those Bristol Palin wannabes, has been controversial to say the least.  As teen moms impregnate pop culture with MTV's "16 and Pregnant," "Teen Mom," and movies like "Juno," some pundits are wondering if the reality of teen pregnancy is being disconcertingly endorsed.  And let's not forget Bristol Palin's Emmy-worthy acting debut on "The Secret Life of the American Teenager."  Forever 21's downtown location does carry the maternity line, although the Pentagon City location does not. 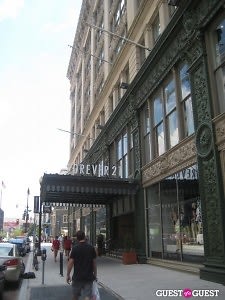