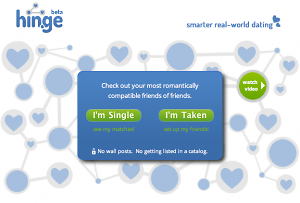 Hinge's co-founder and CEO Justin McLeod was inspired to launch Hinge when he was studying at Harvard Business School and noticed a cute girl in his class. He looked her up on Facebook and saw they had about a dozen mutual friends. He wondered if there was a way to find more cute girls that he had friends in common with, skipping the step most 20-somethings take in the modern dating world.

After months of planning, he launched Hinge in late June with his roommate from his undergrad days at Colgate, Bennett Richardson, the company's CMO. While Justin studied business, Bennett worked at PR giant Edelman, then dove into social media for two years as a part of the David All Group.

Like Facebook's first days, Hinge is starting off with cool, connected, and educated people in a small area--in this case, their first city is Washington. First, they pitched Hinge to students at Georgetown University by hanging out in their library during finals week with flyers. They have been advertising Hinge to the Georgetown socials through Late Night Shots, and have plans to snag the young staffers on Capitol Hill this summer with flyers and happy hours.

"The way Hinge works, we have to have large groups of mutual friends involved," Bennett told Guest of a Guest this morning.

It's not really a dating site, but more of a social dating game that is remarkably easy to use. There is no profile to fill out. Your athleticisim, wit, ambition, optimism and more are ranked by your friends anonymously. Single users can view up to three of their characteristics, and more if they upgrade to the premium account for $7/month.

"There are no negative characteristics," Bennett said. Good. Let's let people find those out on at least date number three.

After signing on to Hinge as a taken lass in the DC-area, I was instantly met with familiar Facebook friends of mine and questions like, "Who could be your boss one day?" and "Who has the neatest room?"

When asked to compare facebook friends I didn't know that well, I just hit the "skip" button. It was so fun picking personalities for friends that before I knew it, 30 minutes had gone by. I am not the only one. Bennett said that users answer over 100 questions, on average, when they log on.

Hinge runs entirely on Facebook at hin.ge, but don't worry about them using your wall to promote their app. Hinge is discreet, and not all the friends you rate are participating in Hinge.

When I tested Hinge out as a single person, I was surprised to find that I was already classified as "optimistic" and "comical" by my facebook friends already Hinge-ing.

Perhaps I had not popped up enough on rating rounds to get a third characteristic.

In addition to boss and puppy questions, single people on Hinge get quizzed on who their type is, which should help lead them to their soul mate based on comparable ratings with friends. Users can also check boxes if a friend is "single" or "taken" so no one wastes their time chasing someone with a date.

I asked Bennett if people are matched with people with similar characteristics. "We match you based on taste, not on your own profile. You could be pessimistic but really into optimists," he explained. If you like a match, you can "save" them, whether they are on Hinge already or not. I had a long list of friends not yet on Hinge with "saves" that the app was beckoning me to invite to join the game.

The site still needs to grow, or I need to spend more time telling Hinge what my type of guy is, or everyone keeps ticking my "taken" box. Although I had over 60 friends using Hinge (there are almost 1,200 users right now), when I checked to see if I had any personality matches as a single person, I had zero. Hinge also differentiates between male and female, but not well with straight or gay (which I think matters on questions like "who is your type." I love my hairdresser, but we will not be dating anytime soon).

The program is very fun, and has the potential to make some really great matches based on what friends think of their friends, and connecting people that might not have otherwise been connected.

Users don't have to pay to contact a match. Just Facebook friend a match. Users can also just be discreet (never mention Hinge at all), ask a buddy about a personality match in real life, and go from there.

Hinge is going mobile this fall, and has plans to expand to the Boston and NYC markets soon. They are working on a "top bachelors/bachelorettes" list for the people that are "saved" the most.