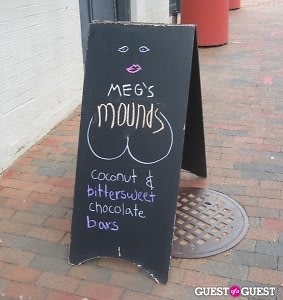 We mean "shamelessness" in the best way possible.  The black sheep of cupcakeries in D.C., Baked & Wired, entices devotees not with shmancy, pristine PR, but rather with awesomely subversive tactics.

"Meg's mounds" are Meg's breasts.  But you knew that.  What other D.C. establishment--other than Camelot, Archibald's, or Stadium types--openly markets itself with crude boob drawings?  (Seriously--are there more?)

Meg is just one more piece of proof that Baked & Wired really doesn't give a shit.  Staffed by an assortment of tattoed, pierced and or otherwise progressive cats, Baked & Wired exudes a nonchalant attitude.

Case in point: their consistent request, or sometimes demand, that everyone "get baked."

It does not take a genius to understand this is a -GASP!- weed reference.  That's right.  They went there.  Now blaze and go to Baked and Wired, which has an excellent selection of munchies. 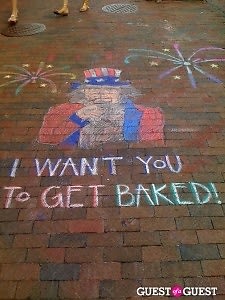 It's not entirely clear in this pic, but here, Uncle Sam is smoking a joint.  He wants you to poke smot!

4th of July chalk drawing outside of Baked & Wired