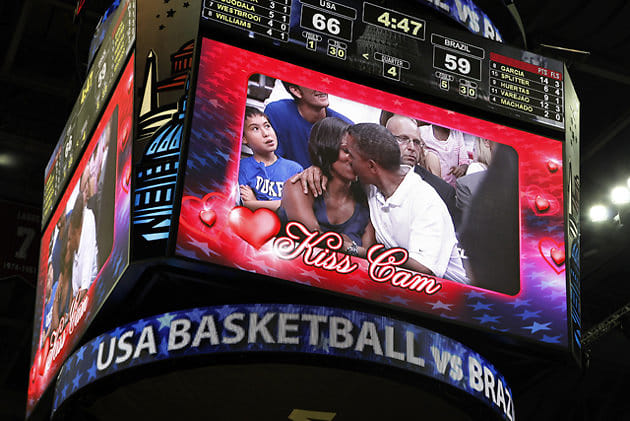 Last night, President Barack Obama and First Lady Michelle Obama were caught on the "Kiss Cam." Spotted at the Verizon Center with their daughter Malia, Michelle's mother, Marian Robinson, and Vice President Joe Biden, they were cheering on Team USA 2012 Olympic basketball team in the exhibition game against Brazil.

The first couple was shown twice as Michelle playfully rejected the President the first time they appeared on camera. After some "boos" from the crowd and a second showing on the cam, she obliged and shared a quick kiss. The crowd inside the Verizon Center was obviously overjoyed as you could hear them chanting "four more years." Team USA also received loud cheers as they proved to be victorious: the winning score was 80 to 69 against Brazil.

Later, you could hear Kobe Bryant, star of the Los Angeles Lakers and returning member to the USA basketball team (2008 Olympic gold medal winner) taking a jab at Obama. According to USA Today, Bryant joked that "PDA is not for everybody, you know what I mean," and later added "but he makes the important decisions, so it's all good."  Bryant's comment came after President Obama disagreed with Bryant's that the 2012 Dream Team could beat the 1992 Dream Team (which included Hall of fame players  Michael Jordan, Magic Johnson, and Scottie Pippen). 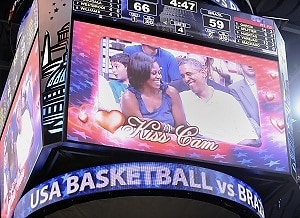 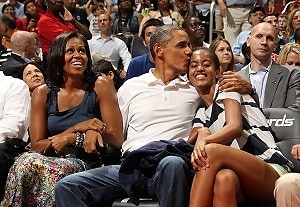