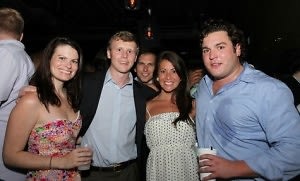 In many ways, George is the modern day equivalent of a speakeasy. You can’t see it from Prospect Street in Georgetown (though, if you drive by on weekend evenings, you’re likely to see a line spilling out onto the sidewalk from the entrance next to Café Milano). It has no windows and decorates its walls with photographs of favorite patrons in rare form. George allows in only list members and guests, and the regulars share a unique rapport.

"Most people who come to George live in Georgetown or Glover Park and went to one of about 20 high schools and colleges," said Landry. "Some people like this and some people can't stand it, but I think you'd be hard-pressed to find someone who feels indifferent about the place, which is a good thing in our minds."

Though only two years young, George has established itself in the Georgetown scene and beyond, competing with tenured neighbor Smith Point just a few blocks away.

DJ Justin Goodman of JG Entertainment was in the booth all night, and partygoers imbibed on “Georange Crushes” and other favorite drinks created by the bar over the last two years.

Some of the people you might run into on any given night at George include actor Sean Penn, supermodel Hilary Rhoda, LNS meme Jesse Biggers, socialite Katherine Kennedy, and some of our star athletes, like Ryan Zimmerman, Clinton Portis and Alexander Ovechkin. Nicklas Bäckström and Mike Green also popped in for drinks a few months ago when their hockey season ended.

There are a lot of mysteries that surround George. Getting on that list can be tough. We asked Landry and Campbell what it took to get on that list. "We periodically add people when friends of ours make suggestions." Ouch, no wonder our intern never heard back when she asked to be added a few weeks ago. There is also a second list with only a few dozen people, known as the Black Card Holders. Black card holders are allowed to skip the line at the front door and indulge in special drinks known as the "Steak Tartare" and "Foie Gras."

"You can't go wrong celebrating a place that never fails at providing a good time, and that's what George does best," said Daniela Kelley, one of the ladies on the list. "George brings great friends together for a great time...that we may or may not remember!" 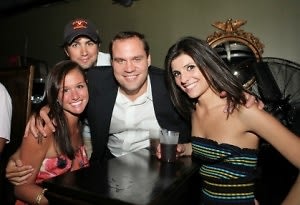 Two bartenders have been with Landry and Campbell since day 1: Mike Procelli and Brendan Martin. There are also staple parties that George is known for, namely the annual LNS Christmas Party and Plymouth Rockdown Thanksgiving Party.

In spite of the exclusivity, they are open-minded when it comes to happy hours and early evening events at George. "We try to bend over backward to make sure that groups or individuals hosting events have a good experience, whether it's a large corporate event, a wedding party or a small birthday party."

It hasn't always been smooth sailing for the owners; their famous (read: expensive) A/C system broke down one night. Georgetown's ABC board has also come down hard on them for noise complaints, but no surprises there.