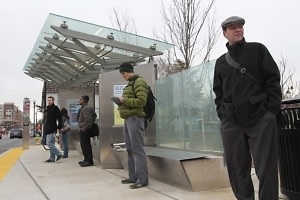 The first of 24 "super stops" opened in the DC suburb of Arlington this week along Columbia Pike, according to the Washington Post. The stop features sleek glass-and-steel design, an electronic map that tracks bus routes, and heating elements in the ground.

The only problem (besides the price tag) is: the shelter won't keep out wind or rain.

The bus stops will be incorporated into the street cars planned for Columbia Pike, which should help alleviate the traffic as high-density buildings pop up there over the next decade.

Arlington was recently ranked the sixth wealthiest county in the country.