The two metal detectors at the Old Post Office Pavilion probably wouldn't have stuck out to us so much if we hadn't waited in 45 minutes with hundreds of people to get into the Postal Pavilion Halloween Party on Saturday. We might not even have minded the wait if it had been a seasonally appropriate 50-degree night.

But no, it was Halloween, and lots of us were wearing tiny costumes on the unseasonably cold 35-degree night.

Plus, what is the Postal Pavilion protecting? Not even our finest museums have metal detectors...

I think Amy S. on Yelp said it best: 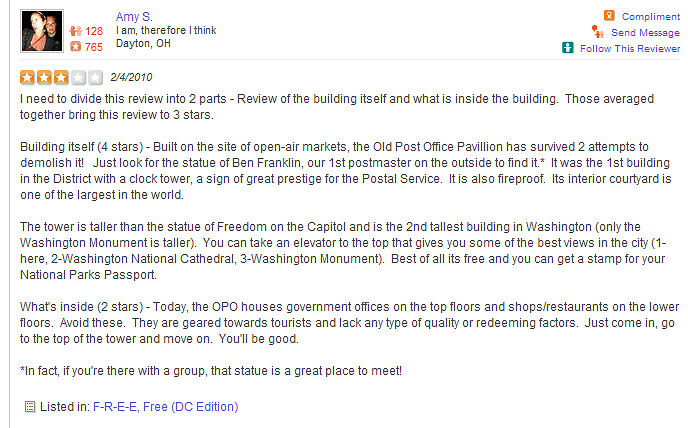 They're protecting some tacky tourist trap shops and eateries, a statue of Ben Franklin, and a clock tower.

I could see the clock tower as being a potential security issue; it has 360-degree views of DC and you can see a lot of important buildings from there...but a lot of buildings in Rosslyn have impressive views, too, and they don't have metal detectors!

The Postal Pavilion offers itself up as a venue for a party with a capacity of 1,900 people. We received confirmation that there were fewer than 1,900 at the Halloween party. Instead of letting them in to party upon arrival, each person had to go through one of two metal detectors.

It's too bad, because the interior is cool for concerts. There are three levels, a lot of bathrooms (although there were long bathroom lines, too) and I loved the balconies and grand staircase in the middle. Anyone can see why it was picked for the Halloween party, and once we heard the bands and grabbed our drinks, we were able to kick that bad first impression and enjoy ourselves.

We asked one of the event planners what he thought of the venue:

Aside from the issues with the entrances, the event went very well. The bands and DJ got high marks and there were barely any lines at the bars. The door situation, however, was infuriating, particularly with the cold weather. The Old Post Office Pavilion hosts events of this size quite regularly, so we had little choice but to take them at their word when they repeatedly assured us that their GSA commissioned security would be able to process our guests quickly. I think it's safe to say that in the future we'll steer clear of venues at which the federal government has any role in managing the door.

The Pavilion hold events of this size quite regularly?!

Apparently the metal detectors cause problems when there isn't a huge event going on:

Although it's unrelated to the metal detectors (kinda), we think the staff should get searched, too, because they offered our friend some marijuana at the party, like we wrote yesterday. They were also taking $20s from anyone that wanted to shorten their wait time.

Otherwise, this place will flirt with the idea of demolition, again. Apparently Donald Trump is entertaining the idea of renovating the Postal Pavilion.

Until either of those happen, throw your party elsewhere!