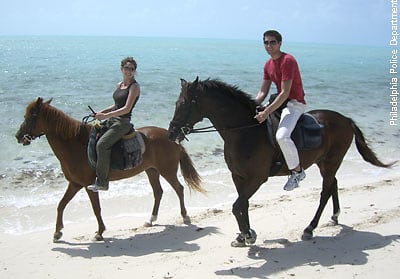 It's a sad day when some low life, poor, con artist decides to start stealing people's identities so he can buy flatscreens at BestBuy...It's an even sadder day when those "identity theives" are "A stylish young couple...the privileged children of well-to-do doctors" Yesterday's Post contained an article titled 'Con'-nie and Clod Lovebirds in 'Stolen ID Spree'.  Apparently Edward K. Anderton, a 25 year old graduate from Ivy League University of Pennsylvania and his girlfriend Jocelyn Kirsch, a 22 year old graduate of Drexel University, and daughter to a prominent plastic surgeon in Winston-Salem, NC joined forces to become the 21st century version of Bonnie and Clyde.

Jocelyn said she planned on being an ambassador, and it is unclear where Edward was working, as he was fired this year from his job as an analyst with Lubert-Adler Real Estate Funds.  Oh wait, that's right, he needed a more flexible job.  One that he could travel around the world smooching with his girlfriend and ordering champagne in private hot tubs, because THEN he would know he had made it.  So for the last year these two geniuses fucktards have been traveling all over the world alright...they just charged the tab to several of their neighbors and some good old fashioned strangers.  They were also stupid enough to document all of their trips with loads of photos.  Horseback riding on beaches in Hawaii, the Caribbean, New York, Paris, London, and Montreal.  The pair also bought expensive clothing and jewelery (and apparently hair extensions), scamming more than $100,000 through identity theft.  The police found dozens of bogus credit cards, phoney driver's licenses and keys to over 30 of their neighbor's apartments.

"They are parasites" says Philly detective Terry Sweeney.  They were also not that sharp.  His ivy league degree in economics sure didn't do much...."They used simple off-the-self scams that anyone could find on the internet." said Sweeney.  Parasites indeed....but what do you think of Jocelyn in her swimsuit?? 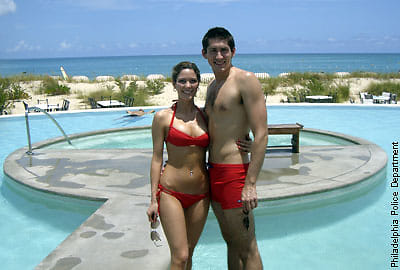