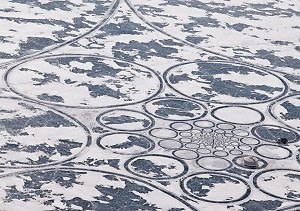 If a picture is worth a thousand words then the work created by artist Jim Denevan must be worth a million. This Santa-Cruz native has found a way to utilize the earth's natural landscapes as his canvas which have ranged from the sandy, arid desserts in Nevada to the snow covered Lake Baikal in Siberia.

Denevan is able to create these massive designs by carving the medium (be it sand or snow) by using pieces of driftwood or a rake and his creation on Lake Baikal happens to be the world's largest single artwork. In a statement taken from Jim Denevan's website, he said,

"There's a freedom and an ability to go anywhere when I'm marking the surface."

Another feature of Jim Denevan's work is the method in which he comes up with the design of his creation. While most artists who make drawings on such a large scale first make smaller drawings and then create the bigger final product, Denevan's process is actually the opposite. He first creates the work on a larger scale (such as in the ice or sand) and then photographs his creations to make them more easily accessible to the public.

“For [the] beach, there’s a vantage point, there are tall cliffs and a huge area where I can try new things each day,”. 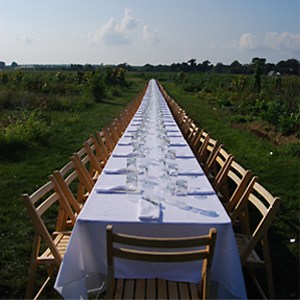 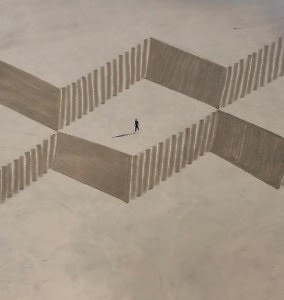 Denevan is also the creator of the Outstanding in the Field event program in which diners sign up to eat a dinner made with local and organic ingredients on a long communal table. The purpose of this program is to reconnect people with the food they eat and those at the table consist of the farmers, producers and chefs of the meal in addition to those who signed up to participate in the program.

While it may be difficult to see his work in person, the New York City Museum of Arts and Design has decided to include Mr. Denevan's work in their Swept Away: Dust, Ashes and Dirt in Contemporary Art and Design, which will run until August 12th. 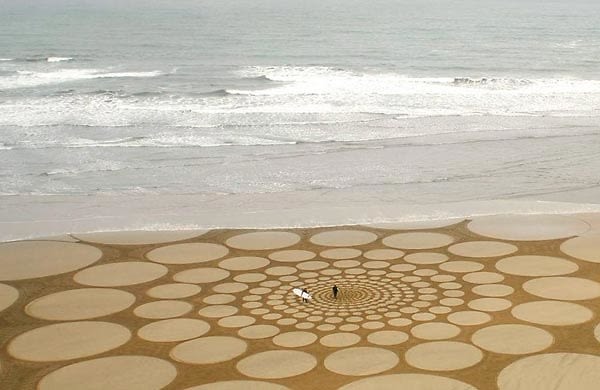