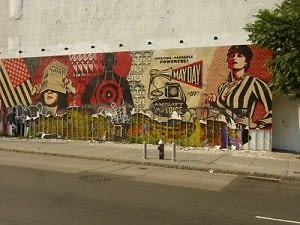 Much has been made of the not-so-gradual dismantling of Shepard Fairey's mural at the corner of Houston and Bowery. But is the project a victim of punk vandals or are those of us mourning its destruction the ones being punked?

Fairey's work went up on May 1st and has been chipped away at ever since. Its battered, tagged husk is still just barely standing today. And the mural's piecemeal ruination has generated more attention than its intact survival ever could have. Isn't that the point?

Shepard Fairey, Merry Prankster: Fairey is one of the more prominent members of the street art movement recently documented in Exit Through the Gift Shop. To paraphrase a line from that movie, the beauty and power of street art lie in its fleetingness. Essentially a gourmet take on outlaw graffiti, street are isn't meant to last. It's meant to stick it to the man and intrigue passersby before it's painted over, leaving audiences wanting more. You want fusty, fossilized timelessness in your art? Head to the Met, not a Houston Street sidewalk. 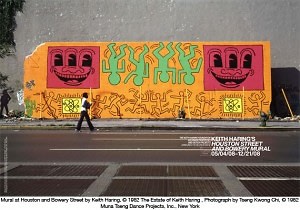 Preceding murals at the site remained miraculously unscathed: A recreation of Keith Haring's iconic piece at the same corner stood undisturbed from May-December of 2008. Os Gemeos' followup mural was safe for nine months before making way for Fairey's. That both stayed so pristine throughout their exhibitions is more remarkable than the current mural's deterioration, to be sure. But the site's civil history makes the war against Fairey's contribution more suspiciously anomalous.

Vanishing mural as metaphor for vanishing Deitch Projects: Jeffrey Deitch made waves in the art world when he announced his move to Los Angeles (as director of the Museum of Contemporary Art) and the attendant closing of his powerhouse SoHo gallery, Deitch Projects. The Houston and Bowery mural was a satellite Deitch Projects property. So what better way to mischievously mark the departure than literally running off with the art itself? It's like a curator's equivalent of stealing a stapler on his last day of work after being fired, only less depressingly quotidian. 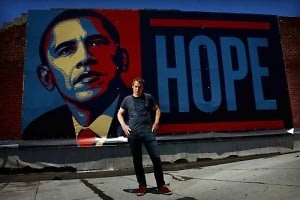 Protest over Obama flap: There was a big, convoluted dispute between Fairey and the AP over the artist's use of an AP image of Barack Obama for his "Hope" poster during Obama's 2008 presidential campaign. Fairey could be taking out his frustrations over the multiple lawsuits that stemmed from that fair use trial by using his own mural as a punching bag. Or he (and his minions) could be making a point about the democratic mutability of art and the futility of trying to keep it all to oneself.

Fairey has kept quiet as his work has been ripped to shreds. Evasiveness is another necessary hallmark of street artists. But the buzz surrounding Fairey's endangered New York mural has more than made up for his silence, and kept his project alive.