The Jim Henson retrospective comes home to the birthplace of the Muppets; Johnny Depp is working on new film with Julian Schnabel; one of Banksy's oldest wall art may be lost forever; Patti Smith as artist in her new photography show;  and the suprising war on graffiti in an age where street artists rule supreme. Read on for the latest in art news.

The traveling Smithsonian exhibition, "Jim Henson's Fantastic World" is currently making its last stop at the Museum of the Moving Image. The exhibition features videos, drawings, story boards, and puppets of favorite characters, including Rowlf, Kermit, and Gobo from "Fraggle Rock." Also included are snippets of a side of Jim Henson that most don't know about, like his work on the experimental film "Time Piece," his design for a multimedia psychedelic nightclub, and a documentary for NBC titled, "Youth 68" about 60s youth culture that included interviews with Jefferson Airplane and the Mamas & the Papas. The exhibition is on view until January 16, 2012.

In the Hand of Dante revolves around Dante’s masterwork “The Divine Comedy,” and interweaves two separate stories, one set in 14th century Sicily, Italy featuring the legendary poet Dante Alighieri, and another set in 2001 featuring a fictionalized version of Nick Tosches, the book's author as the lead. Both stories alternate as Dante tries to finish writing his magnum opus and goes on a journey for mystical knowledge in Sicily. Meanwhile Tosches the Dante expert, living a quiet life in New York is swept up into an underworld of danger and mystery when black market traders ask him to authenticate what might be Dante’s original manuscript. Depp’s Infinitum Nihil production company landed rights to the project back in 2008, earmarking the role of Tosches for Depp.

“There’s a great book called ‘In the Hand of Dante’ by Nick Tosches,” Schnabel told The Playlist. “It belongs to Johnny, but I’m not going to make it for a couple of years. We’re gonna work on writing it, developing it. We didn’t sign anything. It’s just something Johnny asked me to read and I think it’s a great book so maybe you should read it. It’s pretty beautiful. It’s about everything.”

Dante isn't everything but he is significant and this will be a production worth watching if it gets off the ground. 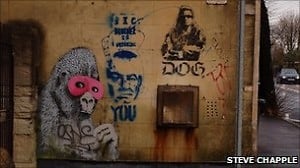 [via] The gorilla in a pink mask on the wall of the ex-North Bristol Social Club was a familiar landmark in the area for over 10 years. The building was recently bought by Saeed Ahmed and turned into a Muslim cultural center. The new owner having never heard of Banksy assumed it was a regular piece of graffiti and had it whitewashed. Ahmed said, "I didn't know it was valuable and that's why I painted over it. I really am sorry if people are upset." Mr Ahmed said he was willing to explore options to see if the whitewash can be removed and the painting restored. 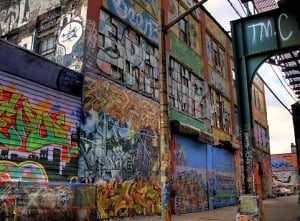 Councilman Peter Vallone recently passed anti-graffiti legislation which prohibits the purchase and installation of new roll-down security gates on city storefronts. The gates are just solid squares of metal and work as a classic canvas for graffiti. “This bill is one of the things I am most proud of,” Mr. Vallone, declared in his recent interview with The Observer which perhaps has to do with the fact he invested 5 years into the process.

He has been dubbed “Graffiti’s Public Enemy No. 1”, a deserved title after another legislative move which opposed Brooklyn Museum of Art’s planned “Art in the Streets” exhibition, due to its overt support of street art, or graffiti, as a medium of artistic expression. In the same Observer interview Vallone stated, “a very small percentage [of graffiti] shows some artistic ability.” Who knew that a political background also made you an expert in what should be considered art. 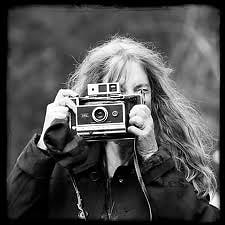 Patti Smith has admitted herself that she has organized music tours around tracking down objects that fascinate her including Robert Mapplethorpe’s slippers, the river house where Virginia Woolf took her life, the grave of Susan Sontag, and a life mask of William Blake. Smith used an old 1967 Polaroid to capture photographs of these objects. The photographs will be shown in an exhibition at the Wadsworth Atheneum Museum of Art in Connecticut, titled Camera Solo opening October 20.