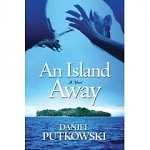 This one comes from a tipster, and while it looks a bit heavy for a beach read, it does take place in Aruba. Thanks buddy.

In his debut novel, An Island Away, Daniel Putkowski takes us far from the sparkling beaches and glamorous hotels of his small caribbean isle, to a waning refinery boomtown of barroom brothels, flexible morality, and one tourist trap known as Charlie's Bar.

In a place that's more Wild West than tropical paradise, we meet Luz, a young Colombian woman working as a prostitute to pay off her family's debt, and Sam, an aging American expatriate looking to perpetuate his flamboyant youth. Together they find Captain Nathan Beck, washed ashore and barely alive after his tugboat sinks in a storm. For each of them, the town of San Nicolaas provides hope amid desperation as they live dangerously and grapple with reality in pursuit of their dreams. It all unfolds under Charlie's watchful eye. He knows that on his desert island you have to improvise.

Let us know how it goes!