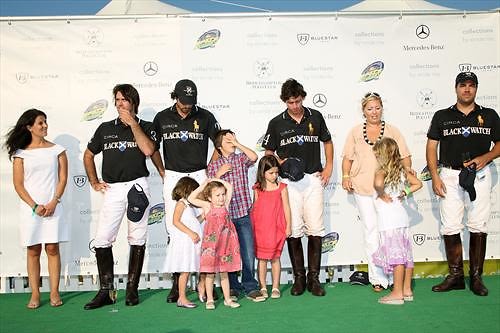 Normally the last place you would EVER think to bring a toddler or a youngster is to the VIP tent at the Mercedes-Benz Bridgehampton Polo Challenge. (Unless the VIPs themselves were the kids.) History was made this past weekend on the Blue Star Jets field as Stride Rite sponsored the FIRST EVER “Kids Day” at Bridgehampton Polo Club. What did this entail? Kristin Cavalari hosted the festivities with Games from Space Odyssey USA- Family Entertainment Center, Balloons in the shapes of animals and FREE shoes! That’s right, Collections by Stride Rite had a table for kids to design their own pair of Stide Rites under the tent as adults downed mini bottles of Perrier-Jouët or Hpnotiq Bubbles n’ Blue cocktails. Clearly, treats for everyone as we watched Team Pony Express face off with Team Black Watch.

More story and photo below:

What I found particularly cool about Stride Rite kids day is that my sister has a 2 year old son and when we learned it was kids day my sister literally shrieked in excitement that we could bring little James along. As we pulled up to the polo grounds and James kept saying “Horsie, Horsie” we found that we were not the only ones who were over zealous about Kids Day. Lots of kids came, including the offspring of Alex McCord and Simon Van Kempen. Also on hand to celebrate the festivities was reality beauty Kristin Cavaleri (think Laguna Beach). She totally designed her own pair of Stride Rites.

While the itty-bittys were designing shoes, I took some time to sneak away for some adult games at the T-Mobile Sidekick Lounge where the bar line was decidedly shorter and the crowd was a bit more mature. I caught up with Tamie Peters Thomas and Rich Thomas, smiled for my PMC photo-op with my new BFF the T-Mobile SideKick LX designed by skateboard legend Tony Hawk and was reunited with my “Shorts Crew summer boys of ‘08” Morten Davidsen and Jared Clark. We lamented that Nick Dietz was missing from the Shorts Crew. We call ourselves the Shorts Crew, well, because we only wear shorts out East. I rubbed elbows with my friends at Plum TV, Nick Leighton and Joe LaPolla, who were gracious enough to have me as their guest on that week’s edition of The Juice. I then hunted down high school BFF Clay Floren and then mingled with Susan Shin, Kim Bates, Tia Walker and Emily Brill while catching glimpses of Luigi Tadini, Marissa Bregman and Justin Belmont - all before Divot Stomping.

Divot Stomping was the highlight of the day because the kids were really enjoying it. I got reeled in by one of the most suave and gentlemanly guys on the South Fork, Luigi Tadini. He was filming an episode for his new show on Plum TV, “Out East with Luigi Tadini” and he called me over to have a chat. I felt validated as he asked me to describe what I thought makes a good party, as if I’m a guy in the know! The obvious answer was: Stride Rite, Polo, Kids and alcohol. No complaints from Week to of Mercedes-Benze Bridgehampton Polo Challenge!!