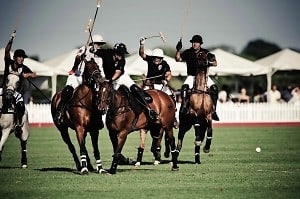 Tomorrow, as most of you have already known for weeks, is the official kick off (or is it horse-off?) of the 16th Bridgehampton Polo season. And while you may be getting ready to put on your drinking dress and prepare for a day of boozing, shmoozing and maybe even seeing a horse, you may want to prepare yourself for what this years' Polo has in store.

Remember that huge VIP tent where 2,500 spectators, including Real Housewives, actual celebs, and wanna-be celebs slurped down champagne like there was no tomorrow? If you don't remember that, it's probably because you were blacked out drunk. Anyways, this year, the VIP tent will aim to actually be filled with important people, and only 350 of them.

And why would they downsize the biggest weekly party Bridgehampton has ever hosted? Polo star Nacho Figueras explains that "the idea was to make it not so much about a party, but about a group of people who are friends and family and interested in watching the game." Oh, so the idea of Polo is to actually watch the game and not drink yourself into oblivion? This is news to me.

This years' season opener features co-hosts Marco Mattiacci, Nacho Figueras and Peter Brant, with a little help from Ferrari. And regardless of how toned down the VIP tent is, Christie Brinkley, Beth and Howard Stern, Russell Simmons, Samantha Yanks, Delfina Blaquier and Donna Karan are all expected to make appearances.

A pre-match reception is set to go down, complete with with cocktails and hors d'oeuvres by Tutto Il Giorno and a Davidoff Cigar Garden is planned to be stationed next to the VIP area. So although the VIP tent situation will be a little off this summer, will you make a Polo appearance?