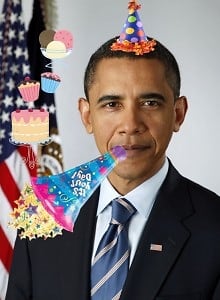 Not your usual birthday check from Grandma...

He did most of the celebrating last night (seems like Thursday would be more fun than Wednesday, at least you're hungover with everyone else on Friday at work) in Chicago with two grand campaign fundraising parties.

According to USA Today:

At one, a crowd of 1,500 paid $50 each to hear Jennifer Hudson, Herbie Hancock and OK Go serenade the president.

In addition, Obama supporters and field organizers held more than 1,100 birthday-themed house parties across the country. The president planned to host a video teleconference that connected all of those gatherings.

So yeah, it's safe to say he got at least a few million on his birthday and likely had a great time collecting it.