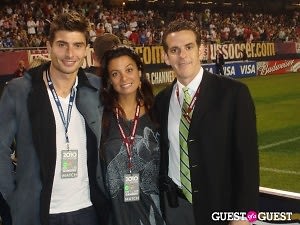 Fresh off their great showing at the World Cup in South Africa, the US Soccer team was back in Chicago for an exhibition match versus hometown favorites-Poland.  Our friends, US Team Captain-Carlos Bocanegra as well as Stefan Dimitrov and Baggio Husidic of the Chicago Fire soccer team were all on hand. Fun fact, Chicago has the largest population of Poles outside of Warsaw.

Leading up to the game were lots of soccer events and photo-ops including an appearance by Carlos on Studio 90-the official show of the US Soccer Team. Studio 90 is hosted by US Soccer Press Officer Michael Kammarman. The show, usually held in studio, was filmed in front of a live audience at Chicago's Small Bar located in Wicker Park. Carlos charmed the packed crowd and stayed for over an hour to meet and greet his many fans.

Friday night was the Chicago vs. Columbus game held in the Chicago Fire stadium. Despite a recent poor showing the hometown favorites beat the odds by defeating Columbus 2 - 0. Afterwards an autograph signing was held by SportWing's Baggio Husidic and Calen Carr.

The main event, the US v. Poland game, was held Saturday at Soldier Field and had over 31,000 fans in attendance. We got to meet and greet with Chicago legend Brian McBride-who is retiring this year. Despite a valiant effort by the US Team, including goals by Oguchi Onyewu and Jozy Altidore, the game ended in a tie. Probably a good thing considering the majority of the attendees were supporting the visiting team and not the home team. 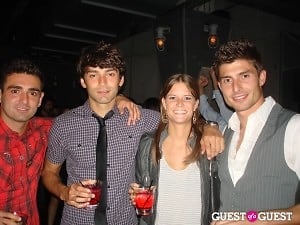 Afterwards the team was allowed to blow off some steam. They had been in town for a week and were under a strick curfew. A lot of the members headed to Chicago hot-spot Underground. Those spotted enjoying the local scenery included a Louis Vuitton clad Carlos Bocanegra, Jozy Altadore, Oguchi Onyewu, Calen Carr, Tim Howard, Michael Kammarman, Stefan Dimitrov and Baggio and Allan Husidic.