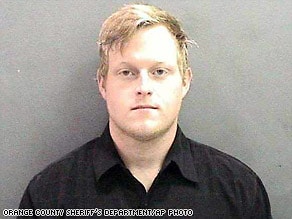 Albert Gore III, the son of Al Gore has been pulled over for speeding, and was arrested for having a bunch of Rx meds in his car (that he didn't have prescriptions for).  Gore has been in trouble a couple of times before for marijuana and the likes, and we hope he can solve his problems and settle down a bit.  A somewhat of a quiet fellow when he attended Harvard University, he generally kept to himself and was not a very visible student.

No word on whether he will be serving jail time, etc. but he certainly seems to be following the general trend of younger people increasingly abusing Rx Meds, a lot more than Marijuana experts say.  People have been snorting Ritalin and Adderall for a long time, so I guess we can't say we are too suprised (and the prescription rate on these things has skyrocketed).  But question:  Who ever figured it was a good idea to snort these things, or that it would do anything?!  I guess kids a boarding schools have WAY too much time on their hands.

The Gore's seem to be tacking the issue head on, and we hope they can figure it out so Al can continue his Green efforts!