Did you hear distant high-pitched squealing last night? It was probably just residual noise from the Sex and the City 2 Premiere last night at Radio City Music Hall. You know Sex And The City fans get easily carried away. (That will be the ONLY pun in this post, I PROMISE).-

Liza Minelli also attended, basking in the glory of her amazing rendition of "Single Ladies", which might be the best thing to ever come out of a sound studio. (Have you heard it? Listen all the way to the end, it's worth it.)

Early reviews of the film are calling it "anti-Muslim", which isn't so shocking...the first movie was a little anti-Mexican, no? Anyway, the movie could be anti-puppies and babies and it would still probably be the biggest box office hit of the summer.

After the premiere, the stars and their guests headed to Lincoln Center for the afterparty, for which both Sarah Jessica Parker and Kristin Davis donned totally new dresses.

If you're dying to see the movie before anyone else, Guest of a Guest is teaming up with Bergdorf's and Popchips to give away tickets to screenings. Go HERE for more information! 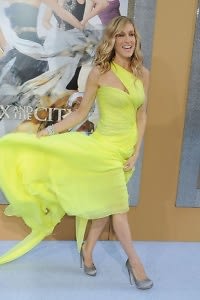 [All photos via Photo Agency]