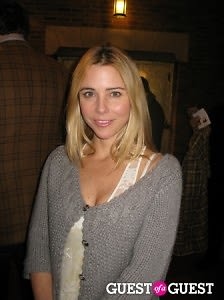 At the premiere of "Elf" at the Al Hirschfeld Theatre, actress Kerry Butler told us about her own magical powers.

"I do have a magical quality," she revealed. "I have, like, celebrity ESP."

How so, we wondered?

Where does it come from--some sort of elfin necromancy?

"Just one of the gifts God's given me," she said.

Another gift Butler has been granted is the opportunity to play the role of Brenda, Frank Abagnale's wholesome girlfriend, in the Broadway version of "Catch Me If You Can." Butler described the opportunity she had to meet the famous check forger as revelatory of the way Abagnale views the story line.

"We were doing something raising money for the show, and Abagnale came out, and people were asking him questions about his life, and he said, 'It's so funny that a book, a movie, a TV show have all been made about this tiny part of my life when it's something I hardly even remember and you know, I've done so much since then."

Though most people are intrigued by the way Leonardo DiCaprio played the gutsy confidence man, Butler thinks the Broadway version well get deeper into the foundational psychology behind Abagnale's actions and their ramifications. Though the tale may have been flashy in cinematic form, Butler said there's more to the musical iteration.

But has Abagnale written her any checks for her role?

"No, but you know, there's always opening night."