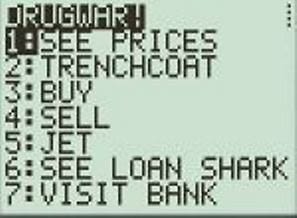 Maybe what I’m about to disclose to you makes me a huge dork in your eyes, or maybe you can relate…I don’t really care what side you take, here are the facts: A CONSIDERABLE amount of my time in high school was spent playing Drug Wars on my TI-86 calculator. By considerable, I’m talking substantial. It all started when I somehow got (mistakenly) placed in the AP Calculus class as a sophomore. There were only a couple other sophomores in this mostly senior class and, well, I didn't have any friends at all. Now I don't want you to feel sorry for me. Once I found my beloved Drug Wars 2.0 I wouldn't have wanted to chit chat with anyone after that anyway. You see, that semester, what started out as me being a timid, shy sophomore dork, morphed into what ended as me being one of the slickest drug lords around. Drug Wars, the highly addictive calculator game made for various Texas Instrument Calcs (ours were mostly TI-86’s), helped me get through those long afternoons in calc class more than Rob, the hot senior quarterback that sat in front of me.

First of all you have to understand that although I’m not ANCIENT or anything, we still didn’t have blackberries or iPhones bouncing around in our uniformed pockets. Even if you did have a cell phone, or the more popular pager, you couldn’t use it in school unless you wanted to risk a demerit. That left us with little else to occupy our brain powers while we should have been using them to figure out derivative functions in calculus. So we turned to the games, and drug wars was my specialty.

Ah Drug Wars….where do I start? If you have ever played the game you know it’s absolutely one of the best things created out of a calculator. Here’s the deal:

OBJECTIVE: To make the most amount of money selling drugs in NYC in 30 days.

PREMISE: The player is a drug dealer living in NYC traveling around the various areas such as the Bronx, the Ghetto, Manhattan, Coney Island, and Brooklyn. Along the way, you buy and sell various drugs including Cocaine, Heroin, Acid, Weed, Speed, and Ludes. You start with $2k and 100 “spaces” in your pocket and no weapons. You have to deal with loan sharks (for your initial capital investments), weapons dealers, and my favorite, “Officer Hardass”. Hardass randomly confronts you during the game and you can either run or fight him (if you have weapons). Also random events like muggings, drug sales, increased drug prices, and the finding of drugs occur.

END: The game ends after 30 days of wheeling and dealing. Final score is calculated by taking the players current amount of cash and multiplying it by two.

STRATEGIES: The basic strategy is to buy a drug in one location at one price and travel to another location to sell it for a higher price (arbitrage). A skilled player must know the standard price of all drugs to realize when it is cheap, and take advantage of fluctuations in the market 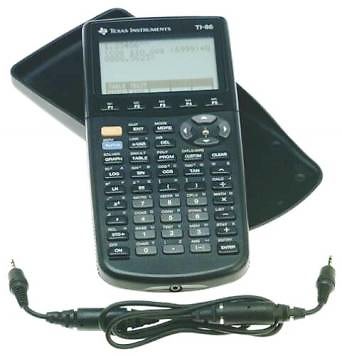 You may have come across the game under one of it's other names: Druglord or Dope Wars. All you needed was a TI calculator and one of those cords to get started. What was also great about this game is that you could save it and come back to it later...something that the TI-83 version had previously lacked.

The funny thing about my experience with Drug Wars is that I probably learned more relevant entrepreneurial skills playing that game than any class taught me. Once I found out the "cool kids" were all playing as well, I earned their respect with my high score, reflected after taking advantage of the increased price of Heroin in Coney Island. Who knew that a calculator game could single handedly educate me in all things regarding drug trades in NYC, a place I unknowingly would reside in down the road, as well as win me a date to the prom?