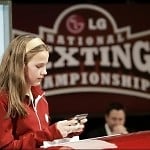 Omfg, did u no r kids can't write??? Apparently new data has been released that demonstrates how Web 2.0 is further devolving our ability to communicate and destroying our culture. No, it's not because we substitute social networking sites for actual socializing, or because YouTube and blogs are ending life as we know it by sinking traditional media outlets. The Pew Internet and American Life Project found in their study that at least 64 percent of teens have used informal style while attempting to write formal school assignments—such as "LOL" style abbreviations or emoticons. (Emoticons! In a paper! Man, I wish I had tried to get away with that—sometimes nothing conveys what you mean quite like a =D ).

They also forgo other traditional rules like capitalization and punctuation. Some say that language rules change over the course of generations, and that in two generations (read: our grandkids) our progeny will be so devoid of the ability to master formal style that capitalization at the start of sentences may go out the window—much like the comma has been a dying breed.

So, of course the powers that be that ran the study are looking the MySpace and blogs as the culprit, much like violence in society must always stem from video games. I'm sure those crazy kids today would argue that the only reason Shakespeare would use elevated language such as "Palm to palm, a holy palmer's kiss" or however that line went, is because back before electricity there wasn't that much to DO—and there are only so many hours a day you can spend "tupping" your dark mistress or young male lover. If Romeo and Juliet were set today, that scene would have been abbreviated to "hh"—holding hands—on AIM, or the new Facebook chat. But to be fair, I have seen MySpace pages of people that graduated high school long before the Internets took over America, and their grammar is equally atrocious as well.