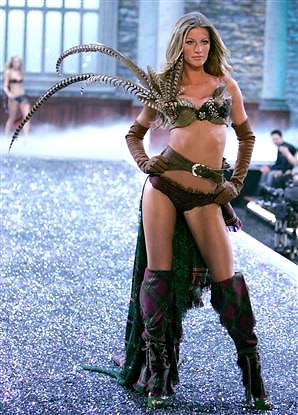 It was a pretty eventful weekend. The annual New York Marathon drew thousands of visitors to our city, Hollywood writers really did go on that strike they were promising, and we all gained an extra hour of partying time on Saturday (though now we can start lamenting the annual recession of daylight and subsequent Seasonal Affective Disorder aka Winter Depression). However, the story that has us more concerned this Monday is the contract signed between Brazilian supermodel Gisele Bundchen and Procter-Gamble Co. In it, Gisele demanded to be paid in Euros following billionaire investors like Warren Buffett and Bill Gross at the growing list of rich people who have concluded that the dollar is cheap and can only depreciate further because "Americans led by President George W. Bush are living beyond their means." (As written in Forbes).

The U.S. Dollar plummeted to its lowest ever last week against the Euro, Canadian dollar, Chinese yuan and its currently the cheapest in 26 years against the British pound! Though analysts seem confident that the dollar will strengthen in coming months, investors seem to be looking at moving their investments to non-dollar currency companies. On Bloomberg, Jim Rogers, a former partner of investor George Soros, said last month he's selling his house and all his possessions in the U.S. currency to buy China's yuan.

"The dollar is collapsing,'' Rogers said last week in an interview. "I'm moving to Asia because moving to Asia now is like moving to New York in 1907 or London in 1807. It's the wave of the future.''

While we are a little concerned about the depreciating dollar bill, (you can't even get a decent glass of wine for under $12 these days), we are not sure packing up and moving to Asia is the answer. On second thought, it could be quite fun to tower over everyone...get a taste of what those models here feel like for once.