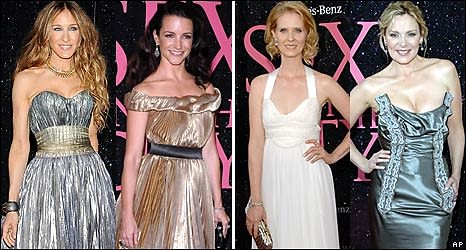 So last night I got to see the craze over the Sex and the City premiere firsthand— not by walking the red carpet like Scott and Naeem, and then going to the premiere, sadly, but talking to the people that came into New York from all over the North American continent for the premiere. With or without tickets. From Phoenix to New Orleans to Montreal, women drove and flew in droves dragging their boyfriends and husbands along for the ride. What it did was give me a lesson in PR.

Perhaps it was a sign of things to come that a story broke about the woman who paid $19,000 to a travel company touting a "Sex and the City" package that promised tickets to the premiere and after party, which turned out to be a huge lie. They also kind of lied about the fact that part of the money for getting into the after party would go to Kim Cattrall's favorite charity, even though she was never approached about the deal. And while most people didn't blow $19,000 only for the company to say, "Sorry, no refunds," they still gave up good money and didn't get much in return.

Most spends hundreds of dollars on vouchers that gave the chance of entrance to the premiere without any guarantee, and camped out all day after traveling from every reach of the U.S. and Canada— only to hear rumors that only 15 people with vouchers got into Radio City. A few hundred more were redirected to a back-up theatre that was NOT the official premiere, and the rest in line were given passes for the movie and sent off to drink themselves into their cosmopolitan-soaked disappointment. So essentially they paid a few hundred bucks for a $12 movie ticket.

But think of the brilliance and how this probably boosted opening weekend box office numbers! So really, readers, if you're going into film or PR, take the beginner's lesson I did and your movie will more than pay for itself. For a movie to be a success even when critics are panning it:

1.) Create a television series that hooks women like a drug, taking the problems of real life that everyone can relate to, add way more sex than real life people have and wrap it in shiny fashion, give it $700 Manolos and seat it in the best restaurants. Make life seem more fabulous than it really is. Pretend Carrie can actually afford that UES apartment on a columnist's salary. 2.) Create buzz about a movie being made when the series is ending, then wait three years. 3.) Start gossip about the TV stars signing film deals, then start leaking gossip to the press. 4.) Come to New York and be seen all around town filming, so that so many pictures have leaked that the plotline of the movie can be guessed months before screening. 5.) In preparation, and in keeping with the product placement theme of the movie, convince fashion houses to get involved with marketing, and every bartender from the guy at the Houlihan's counter to the city's most noted "mixologists" to create drinks based on the movie to target a variety of boozy audiences. 6.) Continue hype by giving away thousands of nearly-useless vouchers to contests sponsored by everyone from Hot 97 to Skyy Vodka. Expect travel companies to hook onto this idea and start selling way overpriced packages. (Side effect: Boosting consumerism in a lagging economy! Isn't THAT what Carrie really did for America? Just what Bush told us all to do—go shopping!) Then throw a curveball by premiering it in London.

7.) Make city buzz peak at a fever pitch as women across from the country that now have a romantic idea of New York glamor and love throw on cocktail dresses and descend on Radio City for a hope to see SJP, even though they're standing on the other side of the building from the red carpet and have no chance of getting in.

And that, my friends, will make you a PR GENIUS! But for all the ladies that went out last night, from 20-somethings to 40-somethings, I had to admire their spirit. Even with disappointed hopes, they STILL thought New York was the best city ever and the trek was worth it even without the movie.