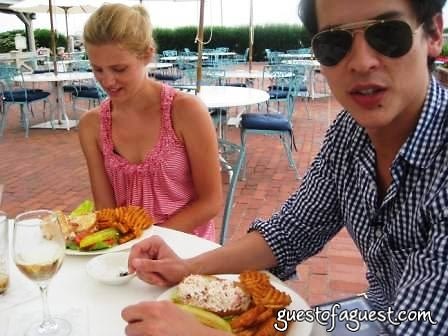 [On the quest for the perfect lobster rolls with Luigi Tadini]

Go HERE for more photos from our adventure with Luigi.

When we tried Sam Talbot's much-lauded lobster roll, we were mighty impressed. Still, we couldn't help but wonder how it stacked up against the south shore's many celebrated crustacean stations, so when we were offered the chance to tag along with Plum TV and Luigi Tadini on their joint search for the perfect LR, we happily complied.

Our destination: Gosman's, which is also in Montauk, but faces the ocean instead of Fort Pond. To get to Gosmans, you go through this quaint, albeit slightly touristy pier, filled with fish shops, boat docks, and trinket booths. The restaurant itself has nothing on Surf Lodge with regards to atmosphere, and while the wait staff is lovely, the owner doesn't seem to have realized it. But what of the lobster?

We liked the simplicity of Gosman's roll, its smaller size, and the fuss-free hotdog bun. But the chunks of lobster were smaller in Gosman's, and the mayo more lavish. Gosman's curly fries tasted better than Surf Lodge's shoestrings, but I recognized them as the same ones the snack bar at my country club defrosts and refries for their unaware patrons every day.

Surf Lodge's lobster roll is $2 more than Gosman's ($19.95 vs $17.95), but what you're paying for -more chunks, better ambiance, much kinder owners, is worth much more than that. Those of you who've had both, what do you think? And where else should we (and Plum TV) go?