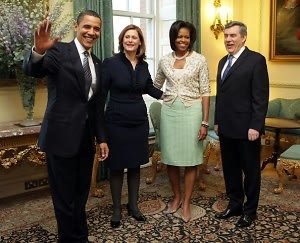 To: Gordon Brown, former Prime Minister of the UK From: President Obama President Obama's gift of 25 DVDs was thoughtful in that he chose classic American movies (The Wizard of Oz, Mission Impossible, The Godfather) to give to the UK's First Family. But the President and Mrs. Obama were attacked in the British press for being, well, cheap. The Daily Mail called the DVDs "about as exciting as a pair of socks" and a reporter at the Daily Telegraph was quick to point out "we do have television and DVD stores this side of the Atlantic." [Barack Obama, Sarah Brown, Michelle Obama, Gordon Brown via]
1 of 6