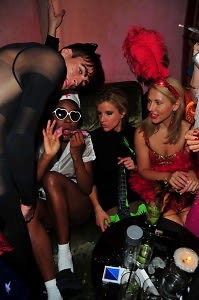 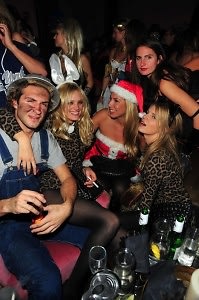 No matter how you dress up this Halloween, make sure you show off your costume at a great party! Here are our picks of the best parties to check out this Halloweekend! Make sure to check out our calendar for more!

io9 & AMC's The Walking Dead Present The Undead Carnival When: 7pm-10pm Where: Invite Only Why: Gawker is also throwing the halloween party. [Details]

Village Pourhouse & SideBar Kick Off NYC's Halloween Pub Crawl When: October 28th, 29th, and 31st, 1pm-1am Where: Village Pourhouse Why: Crawl on over to 70+ of NYC's most popular bars that have $2 draft beers.[Details]

The Gangs Of New York Halloween Party When: 10pm-4am Where: The Liberty Theater. Ticketed Why: Party with runway models and their gangs of New York. [Details]

Allison Sarofim And Stuart Parr's Cabaret When: 8pm-110pm Where: Invite Only Why: Evening of Otto Dix Inspired Berlin [Details]

Halloween/Dia De Los Muertos (Day Of The Dead) When: 6pm-12am Where: Pulqueria Why: Enjoy their Day of the Dead menu. [Details]

V Magazine's Halloween Party With Terry Richardson When: 10pm Where: Club 39. Invite Only Why: The famed photog will host with model Candice Swanepoel [Details]

Halloween Edition Of Not Your Standard Bingo! When: 10:30pm-1:30am Where: The Standard Hotel Why: It will definitely will be beyond your Standard. [Details]

39th Annual NYC Village Halloween Parade 2011 When: 7pm-10pm Where: NYC Why: Come in costume and enjoy 53 different bands, dancers, artists and thousands of other dressed up New Yorkers! [Details]

Heidi Klum's Halloween Party When: 8pm-2am Where: Invite Only Why: It wouldn't be halloween without seeing Heidi Klum's costume. [Details]

DJ Pauly D: Attack Of The Zombie Guidettes When: 10pm-4am Where: Pacha Why: The Jersey Shore DJ will join the Pacha NYC float at the parade before spinning the night away. [Details]

Miranda Kerr's Halloween Party When: 8pm-4am Where: Catch Roof. Invite Only Why: Not only is the model wearing this years million dollar bra, she will host a party to rival Heidi Klum's [Details]