Famed art dealer and owner of the Gagosian Gallery, Larry Gagosian, Hamptons home went up in flames on Tuesday night. Larry was in Europe at the time, and thankfully no other injuries were reported. But one can only imagine the terror being so far away and knowing how many valuable pieces of artwork are in your mansion. Fortunately for him, he has got good help. Amagansett Firefighters that reported to the scene said that Larry's caretaker ran out of the house with two of his most valuable pieces, getting them safely out of the mansion when the fire began around 9 p.m. According to the New York Post,

Amagansett Fire Chief Mark Burnett said works from the dealer's legendary collection suffered no fire or water damage, but there was, "a lot of smoke damage on the walls," The Post's Selim Algar reports. The trouble started when a worker was soldering in Gagosian's kitchen. [via]

50 firefighters brought down the blaze in less than 30 minutes! On top of quieting the blaze so efficiently, Fire Chief Mark Burnett also made sure they saved one of his flat screen televisions. Adding,

I bet it was. Good job guys! 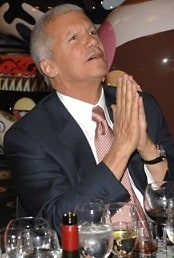