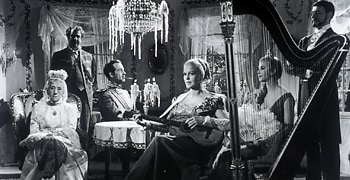 Janus Films is a renowned distributor of foreign, forgotten, and classic films, and to celebrate its 50th anniversary, Guild Hall and curator Gavin Weisen will be presenting Rediscovering World Film: Gems from the Janus Collection -eight films of various nationalities and time periods, films that he feels best represent the Janus archive. The first of these is Ingmar Bergman's big break, the sharp and racy romantic comedy Smiles of a Summer Night.

Ten people of various social classes, some romantically attached, others single or newly single, play musical partners during the longest night of the year. According to legend, there are three types of love possible on a summer's night. To find out what they are, come to the Boots Lamb Education Center in Guild Hall tonight at 7:30.