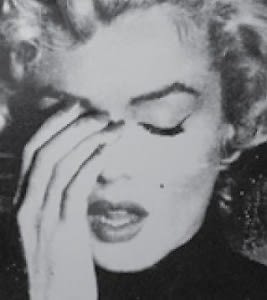 The British photographer Russell Young got his start shooting the rock stars and pop tarts of the late 80's (George Michael, Dylan, Morrissey, Springsteen) before segueing into music videos during a time when MTV was still relevant. Ten years in, he began to paint, though it took him until 2003 to put together a show, the immensely successful (and, natch, controversial) Pig Portraits. His work, which reminds me of a more low-key, less cluttered Warhol, Young writes “is sort of soundtrack to my life, loves, experiences and influences. My method of working is to search, destroy and create..."

There is little destruction evident in his latest series, the aptly titled Diamond Dust. Here, Young has silkscreened black and white images from vintage Hollywood, and painted over them with Swarovski diamond crystals, and the effect is equal parts somber and breathtaking -a dusting of glitz over dark and gray.

The pieces will be on display at the Keszler Gallery in Southampton (48 Main St) through August, and Young himself will be on hand to unveil them tomorrow night from 6-10.