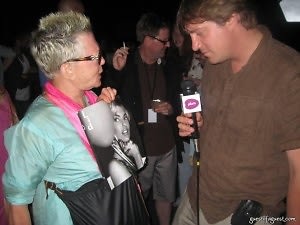 SCOPE Hamptons Opening Reception was held at Salomon Contemporary last Friday.  And, from 8pm-midnight, the hippest of the hip were dancing it up around Michael Bilsbourough's mural.  I had a chance to party crash with Plum TV, and stood behind the scenes watching as they interviewed various party goers.

My favorite was Rose Hartman (Rosie-pictured above). The famous society and style photographer was such a character!  My favorite photo of hers was the one of Bianca Jagger on top of a white horse entering Studio 54.  Jack the Pelican was also there, hailing all the way from Brooklyn.

More store and photos below:

All in all this party reminded me of the hottest party I had gone to in college, the one that Conor Obrist from Bright Eyes was throwing in an old garage.  This time, the people were a bit older and more sophisticated, the drinks were a tad nicer, and the focus was on art not Indie Rock music....but otherwise, it was exactly the same. And, yes, I felt just as hip.