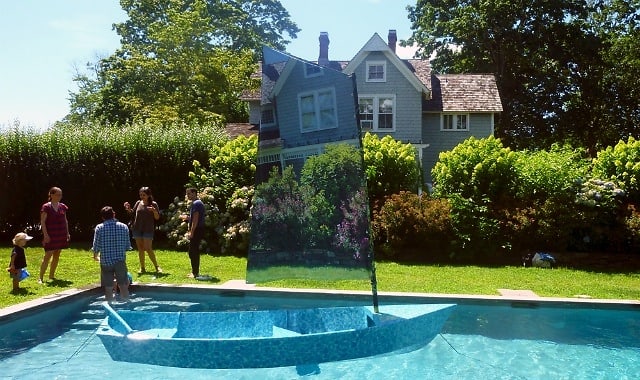 Through September 3rd, Martos Gallery's final pop-up exhibition is being shown in Bridgehampton called "Creature from the Blue Lagoon." The exhibition features many of the best new and upcoming artists including sculptures by Richard Serra and Mark di Suvero but before their work you will pass the first piece of art by Virginia Overton entitled, "Untitled (Tree with Log #1)," which features a hanging tree trunk.

With a hippy feel, this fun pop-up exhibition is not only innovative but continues to push the boundaries. The final show had to compete with the previous two, "The 2011 Bridgehampton Biennial" and 2010's "Wait For Me at the Bottom of the Pool," but curator Bob Nickas was up for the challenge. He is known for his contemporary abstraction and he made sure to keep this characteristic throughout the exhibition. 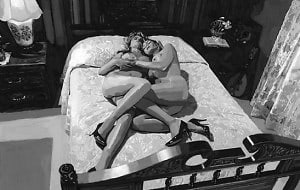 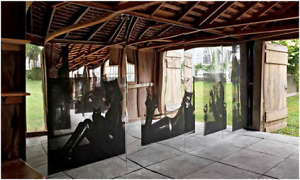 Two must see art features at the exhibit include Tracey Emin's "Everyone I Have Ever Slept With" which is an ode to next-wave feminism and Davina Semo's stainless steel triangle on the second floor of the house called, "AFTER EVERYONE LEFT, SHE FOUND HERSELF ALONE IN THE ROOM." Be sure to check out Semo's "THEY DON'T THROW PEOPLE AWAY, THEY OWN THEM" and "I ACT WITHOUT PERMISSION," These eclectic takes on art are joined by B. Wurtz's "Unkind Birdbath" which is accompanied by pornography by Aura Rosenberg.

Hamptons• Davina Semo• tracey emin• beach house• Mark di Suvero• Martos Gallery• B. Wurtz• Creature From the Blue Lagoon• Virginia Overton• Untitled (Tree with Log #1)• The 2011 Bridgehampton Biennial• Wait For Me at the Bottom of the Pool• Bob Nickas• AFTER EVERYONE LEFT• SHE FOUND HERSELF ALONE IN THE ROOM• THEY DON'T THROW PEOPLE AWAY• THEY OWN THEM• I ACT WITHOUT PERMISSION• Unkind Birdbath• Aura Rosenberg