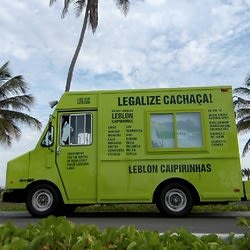 Though it may look like any other bright green delivery-style truck from the outside, the inside has been totally outfitted as a chill lounge...and it's even got a hidden agenda! The Leblon Caipi-Mobile, usually stationed in either LA or NYC, has been spotted once or twice out East, and is rumored to be making another appearance before the sunny season ends. Not only the coolest destination for you and your friends to enjoy a cold Caipirinha or their newest concoction, the LeBlon James, this portable lounge is also on a mission to legalize Cachaça.  What do you mean, legalize...isn't alcohol already legal for those of age?  Well, according to U.S. law, spirits made from sugar cane are by default labeled as rum - in Cachaça's case, ‘Brazilian Rum.' This nomenclature is inherently incorrect, though, since Cachaça is made from fresh cane juice, not molasses (as rum is), and thus has a distinctively fruity, fresh nose (as rum does not). As Cachaça gains more popularity in the United States, people become more confused about the distinction, spurring the campaign to legalize the use of the term Cachaça.

For the full story and to sign the virtual petition, click here!  And be sure to keep an eye out for the Leblon Caipi-mobile rolling through a Hampton near you.