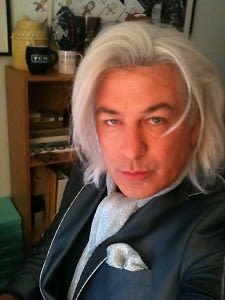 He was born in Massapequa, is an Amagansett resident, and has owned a home on New York's Upper West Side for two decades, so to call Alec Baldwin a New Yorker is 100% accurate. Although rumors have been flying around that Mr. Baldwin will be running for mayor in 2013, he recently sat down with The New York Times to set the record straight, and announced what his real plans are. [Photo via]

With his hit show "30 Rock" filming through April, it would be impossible to properly put a campaign together but that is not why Alec is holding off.

Mr. Baldwin said that he would probably sit out in 2013 but run in a later election, and that he wanted to educate himself about the mayor’s office first. He is talking with two top universities about enrolling in a master’s program in politics and government “to help me better understand what the fiscal imperatives of that job are,” he said. “What’s the reality of the city unions, of contracts, agreements, teachers, infrastructure, decentralizing, everything? And utilities, Con Ed, the M.T.A. — how does it all work?” [via]

He has, however voiced strong opinions on how he has felt about Mayor Bloomberg's rewriting of the term-limit laws back in 2008 (which gave Bloomberg the chance to serve another four years as the Mayor of New York).

Alec prides himself on his ability to not think "like rich people do", and it is for this reason that he believes

I am glad that Alec is going to go and educate himself before taking a leap into running for office. The new Twitter star even takes to his account from time to time to voice his opinions on government. Most recently he stated simply,

Running for office is serious business.

Although he stole my heart back before his bloated-ness and T-rex arm span set in, I would need him to win me over in a whole new way in order to catch my vote (should he decide to run).

Speaking of him stealing my heart, the real shock of this Times article came for me when this bomb was dropped.

He has owned his home on the Upper West Side for more than two decades but is reluctantly leaving the neighborhood for a downtown location to be closer to his girlfriend, Hilaria Thomas, 27, who works at a yoga studio. [via]

Remember this? He bounced back from this okay, so he already has the whole scandal thing under control. I am sorry Alec, but I had to bring it up, you really left me no choice.