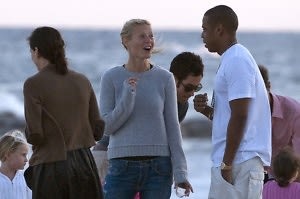 We still have a few months until beach season, but the 2,900 non-resident East Hampton beach-parking permits are already sold out, and it's the rich and famous who have snagged the last few. According to the New York Post, Coldplay drummer Will Champion bought the last of the $325 parking permits, which sold out in record time this season.

Other celebs you might be seeing on the beach this summer include Jimmy Buffett, Jeff Gordon, and Gwyneth Paltrow, who all were able to purchase one of the coveted parking permits.

[Gwyneth Paltrow and Jay-Z, photo via]

Village Administrator Larry Cantwell has bared the brunt of angry summer visitors who weren't able to get their hands on a permit, and he has fielded hundreds of calls since the passes sold out in late March. He told the Post,

“I’ve gotten calls from everyone you can think of...Congressmen, federal judges, celebrities. They tell me I’m ruining their summer. They tell me they’ll pay whatever we want for them.”

But Cantwell, who has been a popular Village Administrator for 30 years, says that it's not about money. He explained that once sold out, there are simply no more parking permits available, saying,

“We just need to keep control at our beaches. I’m not trying to ruin anybody’s time out here.”

The biggest disappointment this summer may not be the lack of beach passes, but the absence of lifeguards at East Hampton's popular Georgica Beach. Though Main Beach and Wyborg Beach will be guarded this summer, beach-goers can expect even more crowds than usual due to Georgica Beach's closure.

But no need to fret -- the boys at Hamptons Free Ride will be eagerly awaiting in the East Hampton town parking lots (near the YMCA) to give free rides to the beach!