You know you've reached the village of East Hampton town when you pass the "white house" on your left and the big pond on your right. Well, if you were driving through town over the weekend and noticed something was off, you were right. Apparently some pranksters got their hands on the pond, and using a non-toxic dye made the water a funky-looking green.

The usual color of the pond... [photo via] 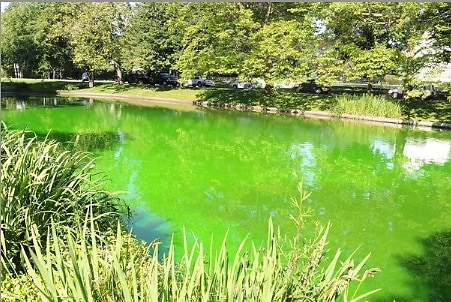 Don't worry, the green "situation" was over by Tuesday, with the pond returning back to its normal shade of boring. At first, Mayor Paul Rickenbach Jr. was thinking that the color transformation was due to natural causes. But after a water sample was taken, it was confirmed that it was most likely due to dying tablets. Although the tablets are non-toxic, and has appeared to have done no damage, should the Green Goblin who did this prank get caught they could face between $3,750 to $37,500 in fines and/or up to one year in prison for being in violation of the State Pollutant Discharging Elimination System. No animals were injured.