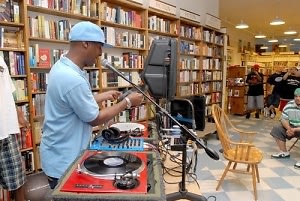 Remember that tree we posted? Seems that beast was responsible for 2,000 East Hamptoners' power outages. When nature calls, she doesn't want any interference... [27East]

Sag Harborers decide "there's nothing better in life than messing around in [row]boats," and build a boathouse. [27East]

Grandmaster Flash was here, but nobody (including us) knew. It's called publicity, people! [Newsday]